Bre Shannon Seltzer (born June 28, 1981 in Los Angeles, California) was a Kidsongs kid seen in Kidsongs: Very Silly Songs (primarily seen wearing a blue shirt and was the third person mentioned at the beginning of the video), Kidsongs: We Wish You a Merry Christmas, and Kidsongs: Play Along Songs (where she appeared in the song "Bumpin' Up and Down" wearing a light blue shirt and pulling Katie Polk on the wagon). Bre had a pale skin and long curly brown hair. She replaced Nicole Mandich in 1990 and was replaced by Alexandra Picatto in Kidsongs: If We Could Talk to the Animals. Her brother, Chad Seltzer, was also a Kidsongs kid. She also shares the same birthday with another Kidsongs kid, Karli Supera. 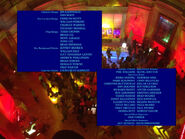 Add a photo to this gallery
Retrieved from "https://kidsongs.fandom.com/wiki/Bre_Seltzer?oldid=37446"
Community content is available under CC-BY-SA unless otherwise noted.