Kidsongs: A Day at Camp
Katie Polk (born June 9, 1983 in Los Angeles, California as Katharine Rose Polk) is a former Kidsongs kid from 1989 through 1995. Katie had a black curly hair and tan skin. She is the daughter of Carol Rosenstein, sister of Brian Rosenstein, the stepdaughter of Bruce Gowers, and the stepsister of Sean Gowers.

Today she is now known as Katharine Polk and is now a designer for Houghton fashion. She shares a birthday with a former Kidsongs kid, Divita Wright. 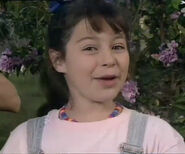