Kidsongs: A Day with the Animals

A Day with the Animals

Animals
Kidsongs: A Day with the Animals is the sixth entry of Kidsongs Music Video Stories released on August 25, 1986 (as announced on July 26).

Dancing dolphins, mighty whales, singing chimpanzees, elegant elephants, wacky walruses, a regal rhinoceros and more animal friends costar with the Kidsongs Kids in this magical journey through the animal kingdom. You'll love the kids' talented dog, Bingo, be amazed by a real Bengal tiger and laugh at a llama on this delightful tape you'll want to watch over and over again. 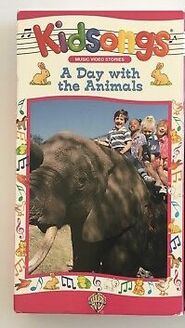