View source
watch 01:36
We're Getting Mutants in the MCU - The Loop
Do you like this video?
Play Sound

Vehicles
Kidsongs: Cars, Boats, Trains and Planes is the fourth entry of Kidsongs Music Video Stories released in June 1986. It was based on the Nursery Rhymes cassette of Small World from the Sing & Multiplex from Ivory Records along with Kidsongs: A Day with the Animals and Kidsongs: A Day at Camp. 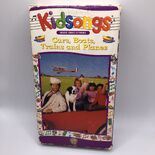