World culture
Kidsongs: I'd Like to Teach the World to Sing is the second entry of Kidsongs Music Video Stories released in February 1986. It was based on the Fun Songs cassette of Small World from the Sing & Multiplex from Ivory Records along with Kidsongs: Ride the Roller Coaster and Kidsongs: Let's Play Ball. 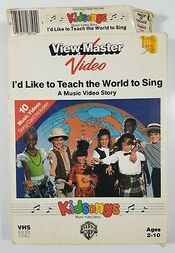 Retrieved from "https://kidsongs.fandom.com/wiki/Kidsongs:_I%27d_Like_to_Teach_the_World_to_Sing?oldid=41104"
Community content is available under CC-BY-SA unless otherwise noted.