Musical instruments
Kidsongs: Play Along Songs is the fifteenth entry of Kidsongs Music Video Stories released on May 25, 1993. 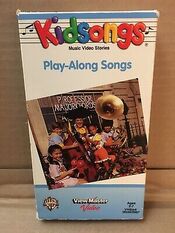