America
Kidsongs: Sing Out, America! is the fifth entry of Kidsongs Music Video Stories released on August 25, 1986 (as announced on July 26). It was renamed Home on the Range in 1990 and Yankee Doodle Dandy in 2002.

"Turkey in the Straw" Band 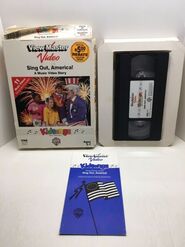 1990 VHS release that got retitled to "Home on the Range"