Humor
Kidsongs: Very Silly Songs is the twelfth entry of Kidsongs Music Video Stories released in January 1991. It was recorded in Summer/December 1989 and August 1990 at Universal Studios Hollywood in Universal City, California and released on VHS by View-Master Video, Warner Bros. Records, and Together Again Productions in 1990. 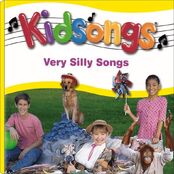 Retrieved from "https://kidsongs.fandom.com/wiki/Kidsongs:_Very_Silly_Songs?oldid=41172"
Community content is available under CC-BY-SA unless otherwise noted.