Kidsongs: What I Want to Be!

What I Want to Be!

Careers
Kidsongs: What I Want to Be! is the seventh entry of Kidsongs Music Video Stories released in December 2, 1986.

Play along with the Kidsongs Kids as they imagine all of the wonderful careers they can have when they grow up. Climb aboard a fire truck and slide down the pole with real-life firefighters, take a cruise on a Coast Guard cutter, ride a bucking bronco and sample goodies at a candy factory as the kids explore all of the fun things they want to be. 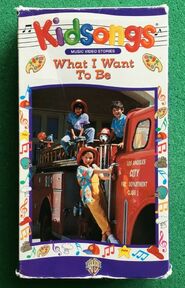