Ruby Anne Biggle is a pink and purple female Biggle who debuted in The Kidsongs TV Show's season 2 episode, "I Can't Play Sports".

Ruby Biggle was voiced by Julene Renee in season 2, while Amy Manlapaz performed in the costume. For the later videos from 1994 to 1995 (seasons 3 & 4), Ruby was performed by Kimberly Bretto-Smith. For the last 2 seasons and for the last 5 videos, she was played by Marilyn Rising. For the Arabic dub, she was voiced by Maysoun Abou Al-Said which voiced Triskin Potter, Hillary Hollingsworth, Nicole Mandich and Alexandra Picatto for the Arabic dub of Kidsongs and The Kidsongs Television Show.

Ruby is Billy's eight-year-old big sister and daughter to Mr. and Mrs. Biggle. She and her family live in a fancy house with a purple roof and yellow spots in Biggleland.

Ruby is sweet, loving, and kind to all the Kidsongs Kids, especially Billy Biggle and Freckles. She is always willing to help when problems arise amongst the group. Like her brother, Ruby changes color when she is sad, mad, or sick (for example, in "Dream On!", Ruby becomes green when she is feeling ill).

Ruby has a pink coat, a purple tail, purple hair, yellow ears, and a light pink tummy and paws. Additionally, she possesses a small pouch on her tummy.  Ruby usually wears a yellow bow on her head, but will swap for another garment when in costume.

Ruby from the back of the VHS cover for Kidsongs: Let's Put on a Show 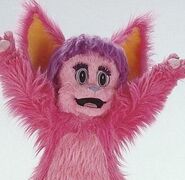 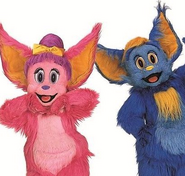 Ruby Biggle, along with Billy Biggle, Professor Majorchord and Freckles Biggle, will be introduced in the Microsoft ActiMates Interactive you products as Microsoft ActiMates: Interactive Ruby Biggle, which will interact with the TV/computer/music products. Ruby will say like 79 or more phrases like, "Hi, kids! My name is Ruby Biggle! Let's have some some fun, together.", "I love playing with you. (Giggles)", "Can you kiss my paw?", "Which instrument do you like to play?", "Let's make music together! (Giggles)", "You're the best!", "(giggles) Great Job!" and 68 more phrases. The toy would also sing and talk with the Kidsongs TV Show, Kidsongs: Music Videos Stories, and the Kidsongs Cds and cassettes along with the audio transmitter, and the Video Transmitter. Ruby sings 3 songs with Kidsongs music with a squeeze of her left hand. She also interacts with objects and plays different games with a squeeze of her right hand. She also interacts with the computer game, Kidsongs Musical Mystery, as she interacts where the musical instruments are.

Ruby, along with her younger brother, Billy, will appear in the reboot with Freckles, where she reunites with the Kidsongs kids, and meets Professor Majorchord in Biggleland for the first time.