Kidsongs: Play Along Songs
Shira Rochelle Roth (born April 23, 1986 in Fresno, California) is an American actress best known for her work on The Prince of Egypt. She appeared in Kidsongs (where she replaced the recently departed Hillary Hollingsworth in 1992 and was replaced by Cheri Avalos in 1997) from 1992 through 1995, Mickey's Fun Songs: Campout at Walt Disney World and played young Abigail Gregory in Tower of Terror. She appeared in The Kidsongs Television Show (where she replaced Melanee Shale and Mark Humphrey II in season 3 in 1995 and was replaced by Sara Perks in season 4 in 1997) as the stage manager. 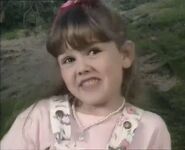 Shira in the song And the Green Grass Grows All Around in Play Along Songs
Community content is available under CC-BY-SA unless otherwise noted.
Advertisement